Flat $510 Minimum includes Drop Off and Pickup inside Stadium

Simply fill out our online form to reserve your place in our schedule!

(One way into game from KCI $260 includes gratuity)

Form may not work in Safari or other browsers.

For your game day ride we offer Black Car Services in Kansas City. KCI Chauffeur is the premiere Car Service provider in the Kansas City area. KCI Chauffeur has a ride to fit your needs. We offer professional chauffeur driven Sedans or SUV that have all the amenities and services you expect. We provide KCI airport pickup, total transportation for meetings, conventions, corporate events and game day transportation to Chiefs Stadium, Royals Stadium, Legends and Sporting KC in addition to private parties and special occasions. Select one of the links above to learn more about the services and options available.

The Ins and Outs of Arrowhead Tailgating Shared from Visit KC.com 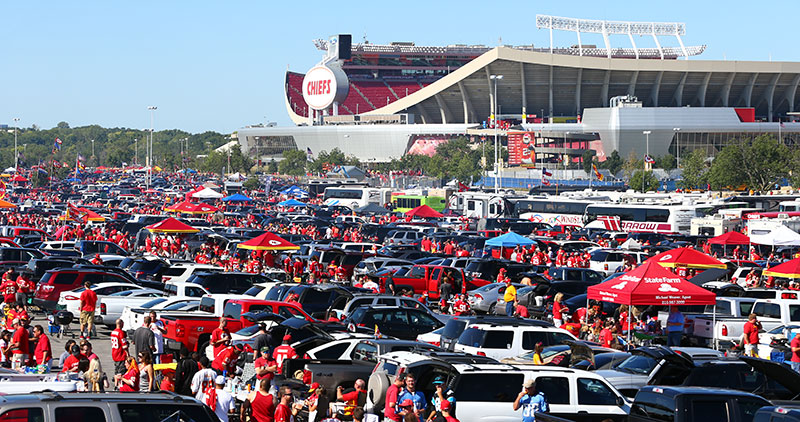 Four KC superfans take us under their wings and give insider information on tailgating at Arrowhead.

Ever been tailgating at Arrowhead Stadium?

Tailgating at Arrowhead is a bucket list item analogous to the experience of seeing the Cubs play at Wrigley. It’s not about sports; it’s about a cultural experience, and one that will glow brightly in participants’ memories till the point at which six feet of terra firma permanently snuffs out the light. 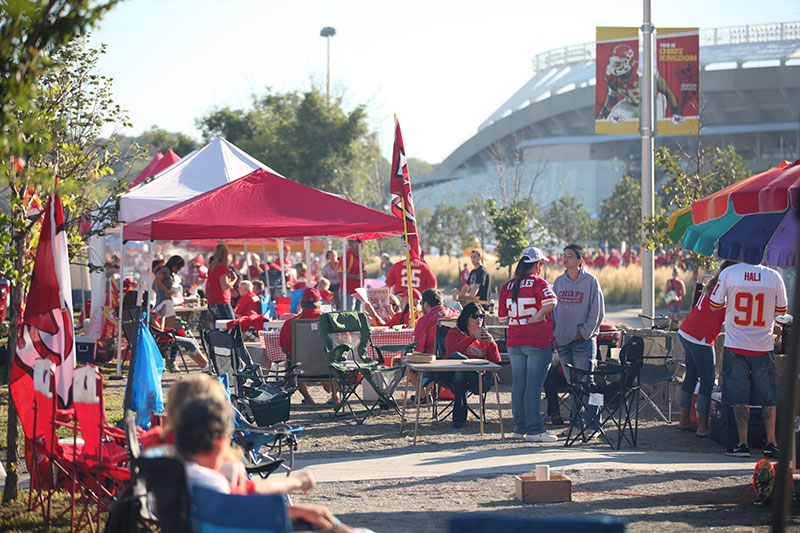 The act of tailgating isn’t unique to Arrowhead. But the turnout, and the passion with which Kansas City tailgaters execute this football tradition, are unique—so much so that Arrowhead tailgate parties attract participants from around the nation. You’ll find football fans, of course. But you’ll also find Indiana Jones types—casual anthropologists who inhale the atmosphere as if a bee feeding on pollen.

Advice From The Superfans 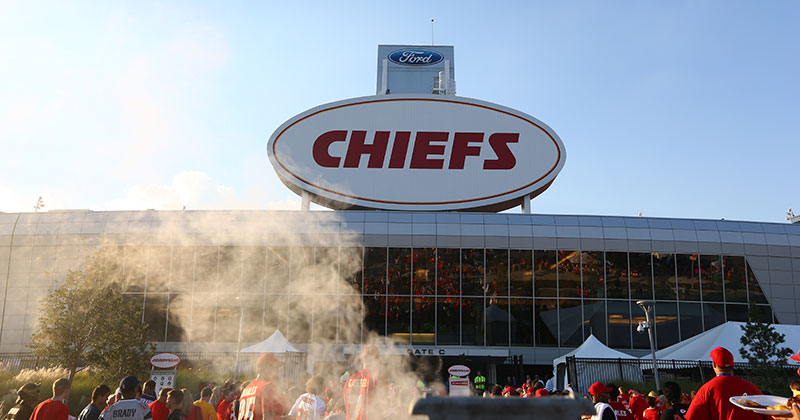 Ty Rowton has been a “superfan” since 1992; since 2000, he’s called himself “X Factor”, and he has the tights to back it up. He says serious tailgaters need to arrive early. Gates swing open three and a half hours before the start of the game, and as games typically begin at noon, 8:30 A.M. would mark the beginning of Arrowhead tailgate time. But 8:30 is too late for Ty. He arrives at 6.

He says arriving before sunrise “just kind of gets you in the mood for the game. There’s a lot of camaraderie with meeting people at the game—other tailgaters. It’s good to see everybody around you that you’ve been to the game with before. And you don’t get to see them once the game starts because they all go do different locations inside the stadium, so it’s really your only chance to socialize.”

David Goings, a 10-year vet who tailgates out of his 1988 Chiefs-themed postal van, says arriving early is the key to scoring invitations to tailgate parties like his: “For first timers—you’ve got to get our there early. Get in the driveway before they open up the gates. That’s where you meet a lot of people.”

For David, tailgating is all about the food—and we’re not talking hot dogs. He saves such pedestrian offerings for pre-season games. (Tailgaters need to warm up too, apparently.)  But once the season starts, so too does the decadence. 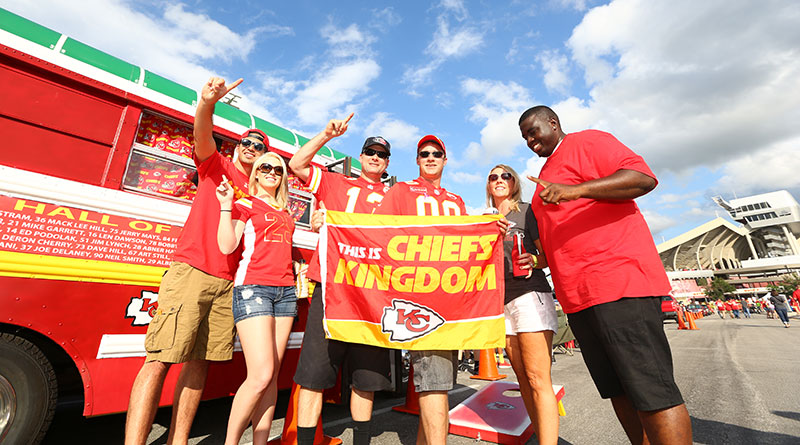 “We cook something different every game,” he says, “and throughout the years, we’ve never really duplicated anything. We’ve cooked everything from ribs to lobster to salmon to brisket. We do a chicken rollup, which is real nice.   We take a chicken breast, flatten it out, put seasonings in it, put some jalapenos in it, and stuff it with cheese. Then we roll it up and wrap it with bacon. One of my favorites we’ve done over the years is a stuffed jalapeno. You hollow it out and use hamburger or shredded chicken, put your cheese in it, and wrap it in bacon.”

Bacon is like currency is Arrowhead. Beautiful, edible currency. Not sure what to talk about while at a Chiefs tailgate party?  Talk about bacon. Want to gain access into someone else’s party?  Tote around a packet of bacon and a sixer of Bud. Preferably, wrapped in bacon.

But as important as bacon is to the tailgating culture of Arrowhead, barbecue is what holds court.

Kevin Johnson, aka “Yellow Fro Man,” has been to more than 200 games. He says, “We do live in the barbecue capital, and a lot of tailgaters try to differ themselves from other tailgaters by making their own unique recipes.” 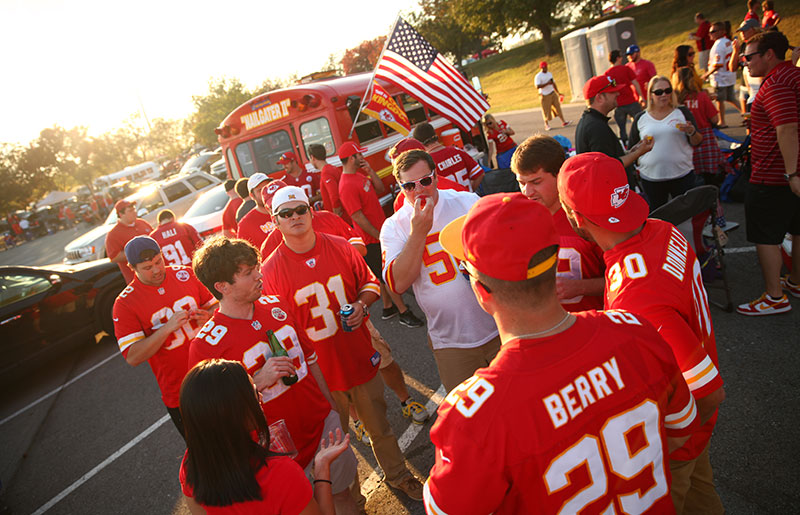 The tailgate landscape at Arrowhead is as wide and varied as are varieties of barbecue sauce in Kansas City.   That being the case, where should one go once inside these pearly gates of wonder?

David says, “Over there at Lot C, which is the middle lot in the front side of the stadium, they got the Tee Pee group. That’s where X Factor and the First Down Elvises tailgate. On my side of the stadium—I’m on the back side—Lot N has a lot of unique campers, buses and RVs.”

The Tee Pee is also one of Ty’s choice destinations. “Last time I was there, they actually had a live acoustic band that played every 15 minutes. We’d play Chiefs songs like Tomahawk Chop and We’re Gonna Beat the Hell out of You, our touchdown song. And we’d dance around and do a little war dance.”

Don’t dance?  Claude Chafin, who’s in his 20th season of tailgating, recommends visiting the chili contest, likely happening in the hours before the Oct. 2 game.

“We have it once a year. It’s on the west end of the stadium, first row, in the parking lot. Last year, there were like 20 competitors. There’s a lot of different varieties of chili, and pretty much anybody who wants to try it can taste it.”

All four tailgaters agree that the best tailgate parties happen during visits from the Chiefs biggest rivals, Oakland and Denver. David also says that tailgating parties in advance of Monday night games are noteworthy. 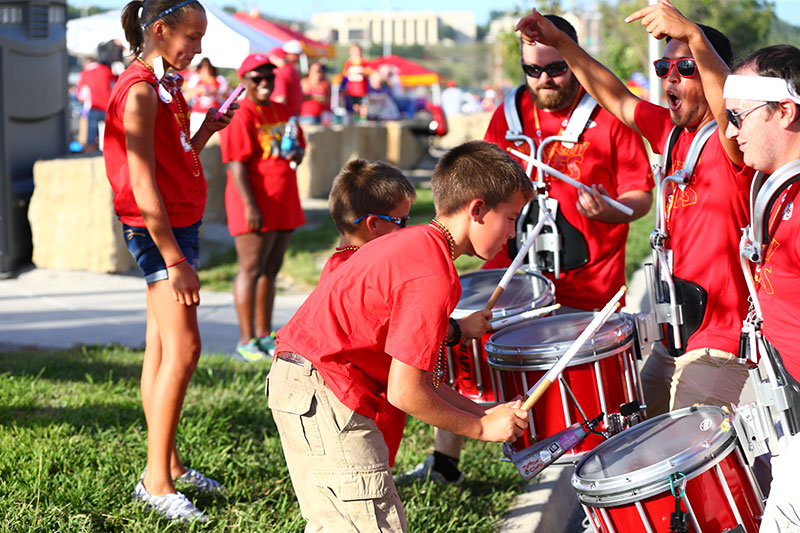 “It’s just a different experience,” he says. “Last year, there was a Monday night game that fell on the same day as a Royals game, so I was out there all day for the whole thing. I tailgated though the Royals and then was out there for the Chiefs. It’s just the atmosphere that makes is so great—the fact that the game is on national TV.”

And that brings us to another salient point: There is no such thing as too much tailgating at Arrowhead. Take an Advil and stop your whining!

But with tens of thousands of fans at each outing, the experience can be intimidating, especially for first timers. That’s why David offers to hold our hands. Call him the Fairy Godmother of Tailgating. Or, more aptly, call him a typical Kansas City tailgater—one of thousands of selfless fans who want nothing more than to share the experience.

“What I’ve done over the years is, through Facebook, I’ve posted the menu, and if you don’t have a tailgate party, I’ll tell you where I’m at. I don’t turn away anybody. It’s all about enjoying the tailgate, especially for first-timers. They’ll come by and they’ll say ‘Wow, this is great.”

Which is fittingly emblematic of the experience itself.

Look up David on Facebook under “Chiefs Tailgaters”. Then find out more about tailgating by visiting the Chiefs’ official tailgating page.